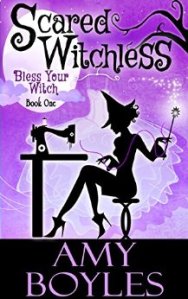 A witch. A murder. A wedding dress?
Dylan Apel is having one heck of a summer. She knows her hand-made clothing is special, but magical? Discovering that she’s a witch is bad enough, but when Dylan realizes there are folks who’ll kill to possess her witchy powers— that’s enough to make a girl want to hide out in the back of her boutique. Only problem is, Queen Witch is in town, itchin’ to make sure Dylan learns to cast spells, and this witch won’t take no for an answer.

Dylan must learn fast—someone just killed her best client with a poisoned gown meant for Dylan. Was it the tall, mysterious hottie in black, who’s suddenly everywhere she goes? After all, the first thing Roman Bane says is he doesn’t like witches. Is he here to save her, or kill her?

Dylan is barely getting a handle on her new powers when she finds herself surrounded by witches bossing her this way and that, local police nosing about, and wary clients—death by clothing is not good for business. And the solstice is coming … a time when witch powers are at their peak. Can Dylan survive the chaos long enough to figure out her new life?

A while ago I was looking for a paranormal cozy and I kept picking up books that weren’t what I was looking for, this, finally, is exactly what I was trying to find. An interesting magic system and a nice cast of characters. I did think there could have been more development on the character front, there might have been too much focused on magic, but they did just discover they were witches. I found the grandmother to be more annoying than kooky or endearing. I also didn’t like how the romance ended, Dylan was being too insecure on that front and I’m concerned that might dominate too much in future books.