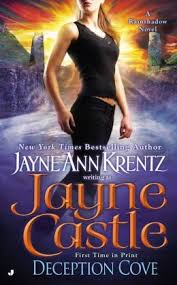 As a light-talent, Alice North has the rare ability to make things disappear, including herself—a gift that comes in handy during her magic act with her dust bunny Houdini. Business mogul Drake Sebastian is day-blind, since his sight was nearly destroyed in a lab accident. But he’s the one man who can see Alice when she disappears—and he needs her. On Rainshadow Island, two dangerous Old World crystals are missing, igniting a paranormal storm. Drake thinks Alice is the key to finding them, and proposes they head there, but only after a Marriage of Convenience. Alice’s honeymoon on Rainshadow is guaranteed to be memorable, as the island—and the passion between her and Drake—is about to explode…

I’m getting kind of tired of Alice in Wonderland references. There were only one or two in here, but because of the mentions each time her name was said I thought of it. It wasn’t what the book was about, but it’s as if people think if they name a character Alice they have to reference it.

Other than that this was a good addition to the Rainshadow series. Love the world Castle has created. It’s just different enough from ours to make it interesting but not take away from the love stories.