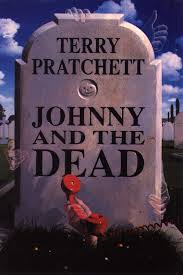 Johnny and the Dead (Johnny Maxwell #2) By: Terry Pratchett

Not many people can see the dead (not many would want to). Twelve-year-old Johnny Maxwell can. And he’s got bad news for them: the council want to sell the cemetery as a building site. But the dead have learnt a thing or two from Johnny. They’re not going to take it lying down . . .especially since it’s Halloween tomorrow. Besides, they’re beginning to find that life is a lot more fun than it was when they were…well…alive. Particularly if they break a few rules . . .

I expected this to be a direct sequel, to talk about the video game aliens, maybe tell me more about Johnny’s unexpected ability. That’s not really what this is. It does continue with Johnny but he no longer talks to video game aliens, instead he can now see dead people.

In case you were wondering this book did come before The Sixth Sense.

I hope I get some answers about Johnny in the next one, not really about his abilities, but more about what’s going to happen to him.