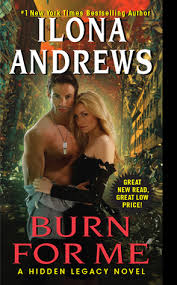 I don’t know what they were thinking with this cover

Burn for Me (Hidden Legacy #1) By: Ilona Andrews

Nevada Baylor is faced with the most challenging case of her detective career—a suicide mission to bring in a suspect in a volatile situation. Nevada isn’t sure she has the chops. Her quarry is a Prime, the highest rank of magic user, who can set anyone and anything on fire.

Then she’s kidnapped by Connor “Mad” Rogan—a darkly tempting billionaire with equally devastating powers. Torn between wanting to run and wanting to surrender to their overwhelming attraction, Nevada must join forces with Rogan to stay alive.

Rogan’s after the same target, so he needs Nevada. But she’s getting under his skin, making him care about someone other than himself for a change. And, as Rogan has learned, love can be as perilous as death, especially in the magic world.

I can only read an Ilona Andrews book for the first time once and I always feel a little sad because of that. I know I can re-read it and I do, I just don’t get to experience the same wonder and not knowing what’s going to happen next.

Anyway. Love the whole hierarchy system with Primes being in control and owning districts and such. It reminds me of her Kinsmen series, which is awesome by the way and you should totally check it out.

Unlike her Kinsmen series, though, people have powers because of a magical serum that was created and now years later there are powerful, rich Primes that pretty much rule everything. Obviously since they’ve been rich for generations they’re completely out of touch with the everyman so when Nevada comes along and turns down not one, but two Primes she’s an oddity.

I liked Nevada, and I really liked her family, I look forward to seeing what happens next. I’m also curious to see if Andrews can change my opinion of Rogan and make me think he’s worthy of love.

Side note: Not a fan of the cover or the blurb. I feel like they cheapen the quality of the story that Ilona Andrews has created. Just an opinion