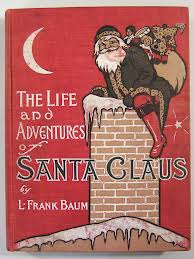 The Life and Adventures of Santa Claus By: L. Frank Baum

Every child knows about Santa Claus, the jolly man who brings gifts to all on Christmas. There are many stories that tell of his life, but the delightful version relayed in The Life and Adventures of Santa Claus is by far the most charming and original of all. Only L. Frank Baum, the man who created the wonderful land of Oz, could have told Santa’s tale in such rich and imaginative detail.

I’m a big fan of L. Frank Baum, but I’ve somehow never read this book. I vaguely remember knowing that it existed but it wasn’t until I started looking for Christmas books that I was reminded of it.

I wouldn’t say it’s as good as the Wizard of Oz, and some parts were definitely dated, but I thought the overall story was very sweet. It is something that I look forward to reading to my daughter when she gets older.

I will say I was surprised by a fairly descriptive violent part in the book, which really just points of the differences between children’s book then and now. People are so much more protective of their children now a days.

Here’s a quote from the book that I liked:

“But it is the Law that while Evil, unopposed, may accomplish terrible deeds, the powers of Good can never be overthrown when opposed to Evil.”