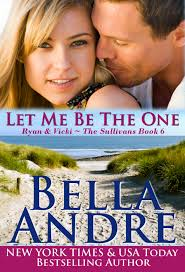 Let Me Be the One (The Sullivans #6) By: Bella Andre

How far would you go for a friend? Back in San Francisco preparing for her big art show, Vicki Bennett needs help protecting herself and her career from the unwelcome advances of one of the judges. She knows that her longtime friend and baseball star, Ryan Sullivan, will know just how to handle things, and he’s the only person she can imagine asking for help. Ryan is thrilled to have Vicki back in his life, and he will do anything to protect her from harm, including playing the role of “pretend boyfriend.” But when their staged kisses and caresses lead to an incredibly sensual night, they both worry that they may have damaged their friendship forever. Have they made the worst mistake possible? Or is the perfect combination of friendship and love finally within reach?

There’s something about books starring baseball players. They always make me think of summer and good times with friends. Not to mention great uniforms.

Ryan and Vicki’s story was sweeter than the other Sullivans. Not to say the racy scenes weren’t plentiful and hot. Ryan and Vicki had loved each other during high school, but too afraid to lose a friend neither did anything about it. Now that they’re adults and currently free things happen.

There was a decent villain in this story, though I’ve noticed that Andre doesn’t really let her men beat the crap out of the jerks trying to take advantage of their women. Chase beat up Chloe’s ex-husband but I think that’s it. The side of me that thirsts for vengeance would prefer a bit more violence toward the douches in this series.