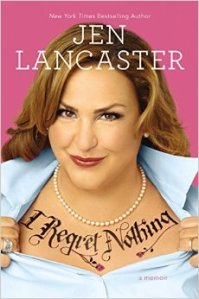 I Regret Nothing By: Jen Lancaster

Sure Jen has made mistakes. She spent all her money from a high-paying job on shoes, clothes, and spa treatments. She then carried a Prada bag to the unemployment office. She wrote a whole memoir about dieting…but didn’t lose weight. She embarked on a quest for cultural enlightenment that only cemented her love for John Hughes movies and Kraft American Singles. She tried to embrace everything Martha Stewart, while living with a menagerie of rescue cats and dogs. (Glitter…everywhere.) Mistakes are one thing; regrets are another. After a girls’ weekend in Savannah makes her realize that she is—yikes!—middle-aged (binge watching is so the new binge drinking), Jen decides to make a bucket list and seize the day, even if that means having her tattoo removed at one hundred times the cost of putting it on. From attempting a juice cleanse to studying Italian, from learning to ride a bike to starting a new business, and from sampling pasta in Rome to training for a 5K, Jen is turning a mid-life crisis into a mid-life opportunity, sharing her sometimes bumpy—but always hilarious—attempts to better her life…again.

I was excited to read this book, not just because it’s the first Goodreads giveaway I’ve won, but because I like Jen Lancaster. I thought Bitter is the New Black was great and really connected with Such a Pretty Fat.

I’m going to make a pros and cons list of what I liked and disliked about the books because of her enjoyment of lists.

I thought her bucket list was good, there were several items on there I would like to do. I did think her information on the publishing industry seemed very one sided as though she was just saying what her publishers have told her, she might want to look into becoming a hybrid author. Just a thought.

I loved what she wrote about being in Rome, it reminded me a lot of my trip to Tokyo, and it bumped Rome up on my list of places to see.

I really relate to what she talks about regarding weight and because of that I liked the end of the book a lot. I’m glad she’s found what works for her and it made me smile because recently I’ve been coming to the same realizations about myself.

She went overboard on the rants about social networking, internet trolls, and occasionally the younger generation. Since I’m technically a part of the younger generation it kind of irked me and came off like a grouchy old man screaming at kids to get off his lawn. I almost didn’t make it past the first half of the book because of it. Every time I got into what was going on she would start another rant and I’d get annoyed and put the book down.

Maybe the age gap between us is finally rearing its head?

That’s really the only con, though, it was so prevalent in the book that I nearly lowered it a star. If the book had been more like the weight loss portion and the trip to Rome or even the riding the bike parts, I would have liked it a lot more. Those rants really bugged me, it’s like that image of Pa Simpson yelling at the cloud.

The whole social media culture, and especially internet trolls, have gotten really bad, but it’s just as annoying to hear people complain about it. We know it’s there and unless we want to take away what makes the internet great then people are just going to have to get over the horrible people and learn to ignore them. And that’s all I have to say about that.

I like Jen Lancaster and even though I had problems with the ranting, I still plan on reading more of her books.

Sidebar: I’m guessing because of ereaders they have changed the cliff notes to just in the middle of the sentence she says Sidebar and then has her little comment. Seeing the word sidebar so frequently was a little taxing, I liked the notes, but maybe just an asterisk?