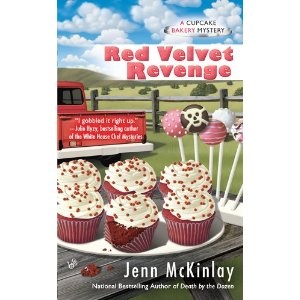 It may be summertime, but sales at Fairy Tale Cupcakes are below zero–and owners Melanie Cooper and Angie DeLaura are willing to try anything to heat things up. So when local legend Slim Hazard offers them the chance to sell cupcakes at the annual Juniper Pass rodeo, they’re determined to rope in a pretty payday! But not everyone at the Juniper Pass is as sweet for Fairy Tale Cupcakes as Slim–including star bull-rider Ty Stokes. Mel and Angie try to steer clear of the cowboy’s short fuse, but when his dead body is found face down in the hay, it’s a whole different rodeo. With a vengeful murderer on the loose, the ladies are quickly realizing that while they came to save their business, they may have to save themselves–and that’s no bull.

Oh my god!!! Why??? So the book ended on a romantic relationship cliffhanger for Mel and Angie both. Of course my library does not have the next book and neither do any of the used bookstores in the area. I really need to find a way to secure income for buying books.

Anyway, I thought more of the story was dedicated to relationship stuff than mystery stuff,but that could be because that’s becoming my favorite part. The mystery was good, plenty of twists and turns, but even with all it’s drama I didn’t really care about it. I needed Angie to get her head out of her ass or Mel to knock some sense into her. Neither happened.

Maybe it’s a good thing I don’t have the next book. Some character traits are starting to grate on my nerves. Mel has some boundary issues and they always seem to be in flux. One minute she’s asking incredibly personal questions like who do you think murdered your husband and the next she won’t push Angie on who she’s in love with. Angie is all temper and was a real bitch in this book. She’s always threatening to kick someone’s ass but never does. Mel really nailed Tate when she called him a wuss, dude just tell her how you feel already.

I’m excited to read the next in the series, but I also think it’s a good thing I’m going to have a little break from the characters.