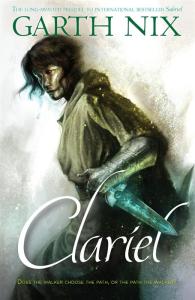 Not the cover I had but super cool

Sixteen-year-old Clariel is not adjusting well to her new life in the city of Belisaere, the capital of the Old Kingdom. She misses roaming freely within the forests of Estwael, and she feels trapped within the stone city walls. And in Belisaere she is forced to follow the plans, plots and demands of everyone, from her parents to her maid, to the sinister Guildmaster Kilp. Clariel can see her freedom slipping away. It seems too that the city itself is descending into chaos, as the ancient rules binding Abhorsen, King and Clayr appear to be disintegrating.

With the discovery of a dangerous Free Magic creature loose in the city, Clariel is given the chance both to prove her worth and make her escape. But events spin rapidly out of control. Clariel finds herself more trapped than ever, until help comes from an unlikely source. But the help comes at a terrible cost. Clariel must question the motivations and secret hearts of everyone around her – and it is herself she must question most of all.

It’s been years since I read the original Abhorsen books and I think that turned out to be a good thing. I’m normally not a fan of prequels but because it’s been so long since I was in this world it didn’t feel like a prequel. I barely remember anything from the first books and reading this one just made me want to go back and re-read them.

The book was a great cautionary tale of what happens when people shirk their duties and don’t teach children important things. The whole situation that Clariel found herself in would never have happened if so many people had done their jobs. The king shouldn’t have just given up on life. The Abhorsen should have grown a pair. Her parents should have actually taught her about her history and why certain things were done. Total disregard for the importance of their duties.

I really couldn’t help but feel sorry for Clariel. She just wanted to live in her woods and no one would let her. The ending is bittersweet and I won’t ruin it here, it goes perfectly with the endings of the previous books, though.

I’ve got a whole pile of books checked out from the library and now I’m going to have to resist re-reading the first three books in the series. I’m really looking forward to Nix’s next book and hope we don’t have to wait as long for it.