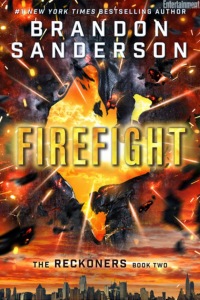 They told David it was impossible–that even the Reckoners had never killed a High Epic. Yet, Steelheart–invincible, immortal, unconquerable–is dead. And he died by David’s hand.

Eliminating Steelheart was supposed to make life more simple. Instead, it only made David realize he has questions. Big ones. And there’s no one in Newcago who can give him the answers he needs.

Babylon Restored, the old borough of Manhattan, has possibilities, though. Ruled by the mysterious High Epic, Regalia, David is sure Babylon Restored will lead him to what he needs to find. And while entering another city oppressed by a High Epic despot is a gamble, David’s willing to risk it. Because killing Steelheart left a hole in David’s heart. A hole where his thirst for vengeance once lived. Somehow, he filled that hole with another Epic–Firefight. And he’s willing to go on a quest darker, and more dangerous even, than the fight against Steelheart to find her, and to get his answers.

Sanderson certainly knows how to write a climactic ending. I was on the edge of my seat as the book came to a close and immediately wanted to read the next. In the heat of the moment I forgot all the little things that annoyed me and had to know what was going to happen next, now that I’m done though all those little things are rearing their heads.

David is an annoying protagonist. I’m not sure if it’s just because he’s acting like a typical nineteen year old boy or if the writing really is inconsistent. One minute David is figuring out something that no one else has before, the next he’s acting like a complete idiot. Flashes of brilliance followed by extreme idiocy. Could just be a typical nineteen year old boy.

I enjoyed how the world was developed but I’m not really liking the Reckoners. They deal with too much black and white and are so resistant to anything they don’t immediately understand. They don’t seem willing to explore new ideas and it was a constant battle for David to get them to do anything.

There were a few deaths in the book but none of them hit me. The characters just didn’t resonate with me and their loss felt like nothing. Their deaths didn’t impact the story in any way except to prove that someone was evil and honestly I already didn’t like that person.

There’s a short story in between this book and the first, Mitosis. I bought it while it was on sale, but was in the middle of reading something else and then totally forgot it. I highly recommend reading it before this book because it’s referenced several times and seems to do a fair amount of world building by explaining Epics powers and weaknesses.

Even with what I disliked this book was still great. I didn’t think it was as dark as the first and I ended up flying through it. Excited for the next in the series, but I have a wait since its current release date is Feb. 16, 2016.