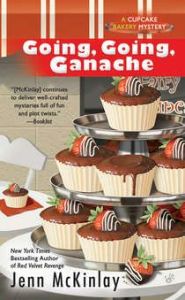 After a cupcake-flinging fiasco at a photo shoot for a local magazine, Melanie Cooper and Angie DeLaura agree to make amends by hosting a weeklong corporate boot camp at Fairy Tale Cupcakes.  The idea is the brainchild of billionaire Ian Hannigan, new owner of SWS (Southwest Style), a lifestyle magazine that chronicles the lives of Scottsdale’s rich and famous. He’s assigned his staff to a team-building week of making cupcakes for charity. It’s clear that the staff would rather be doing just about anything other than frosting baked goods. But when the magazine’s creative director is found murdered outside the bakery, Mel and Angie have a new team-building exercise—find the killer before their business goes AWOL.

So happy to be able to continue this series. By the end of the first chapter I was craving cupcakes and it didn’t get any better. I love Mel, Angie, and Tate, but I think Marty is my favorite. He’s part grouchy old man and wise old sage. He was easily my favorite in this book.

Now, onto what I didn’t like. This was easily the weakest book in the series so far. That doesn’t mean it’s a bad book, just not my favorite. The love triangle I was afraid was happening two books ago reared its ugly head in this book big time. I hate love triangles so freaking much. I feel like it’s an easy way to create drama and it makes the relationship the lead ends up with seem less somehow. Well it makes it feel less when the lead seriously thinks about dropping her original squeeze for the next. Mel’s reasoning for what she ends up doing is weak and makes me doubt her.

Angie and Tate’s relationship is finally making some progress but it’s still going at a snail’s pace.

I’m hoping for more progress in relationships in the next book and a resolution on the love triangle.