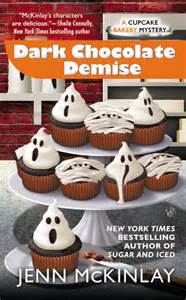 Scottsdale, Arizona, may not be the liveliest place on earth, but it’s never been as dead as this. Hundreds of fans have gathered together for the first annual Old Town Zombie Walk, and Mel, Angie, and the Fairy Tale Cupcake crew are donning their best undead attire to sell some horror-themed desserts to the hungry hordes. But the fun turns to fright when Mel finds a real dead body in a prop casket outside of the bakery’s truck—and the corpse looks alarmingly like a zombie of their own. Knowing that Joe, Angie’s brother and Mel’s former flame, has been working on a dangerous mob case, Mel worries that the murder is a hit gone wrong and that someone near and dear was the real target. To keep any of her friends from winding up six feet under, Mel will do whatever it takes to find a killer—no matter how scary things get…

Lots of relationship stuff with this one, which I loved. In fact it was most of the book. There was, of course, a mystery but it wasn’t like the others. It had more to do with what’s going on with Joe and his case against a mob boss.

I love the relationships and characters in this series. The side characters bring as much to the story as the main character.

Lots of sugar and I find myself wondering how these people don’t have diabetes the amount of cupcakes they eat. Anytime something happens let’s eat two cupcakes. Ummm… I’d love to do that but I’d be the size of a house and shooting up insulin. Oh to live in a book world.

Anyway, I’m caught up with the series and now must wait like everyone else. Waiting sucks, but at least the cliff hanger on this one isn’t as big a deal to me. I mean it’s a big deal, but I can set it aside and not die a little bit everyday while waiting.