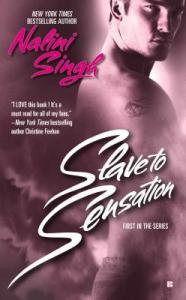 Thank goodness for a kindle

Nalini Singh dives into a world torn apart by a powerful race with phenomenal powers of the mind-and none of the heart.

In a world that denies emotions, where the ruling Psy punish any sign of desire, Sascha Duncan must conceal the feelings that brand her as flawed. To reveal them would be to sentence herself to the horror of “rehabilitation” – the complete psychic erasure of everything she ever was…

Both human and animal, Lucas Hunter is a changeling hungry for the very sensations the Psy disdain. After centuries of uneasy coexistence, these two races are now on the verge of war over the brutal murders of several changeling women. Lucas is determined to find the Psy killer who butchered his packmate, and Sascha is his ticket into their closely guarded society. But he soon discovers that this ice-cold Psy is very capable of passion – and that the animal in him is fascinated by her. Caught between their conflicting worlds, Lucas and Sascha must remain bound to their identities – or sacrifice everything for a taste of darkest temptation.

I’ve read this book before, but I’ve been thinking about it lately and decided on a re-read.

Last time I read the book I wasn’t writing, this time I read it from a different perspective. Looking at it now I loved the world building, there was so much going on in this book and having read several books down the series, it’s obvious that Singh was already thinking ahead.

The Psy are so cold and in control and the concept of them is so interesting. The Changelings are like most other shifters and based on what little was discussed on the humans they’re the same as normal. What was fun and interesting was the fact that they all lived together. There was no moment of ‘holy cow psychics and shifters are real’ moment. It was just accepted and you got to look at what a world with them would be like.

Honestly I could have done with less of the romance because the world was so interesting. The thing is I liked the romance as well and probably wouldn’t want to read the book without it. Kind of like the New Species novels by Laurann Dohner.

I’ve read up until number twelve in this series and I enjoyed the books at varying degrees, none below a three star. The series is excellent and I would recommend it to anyone that like these types of books.