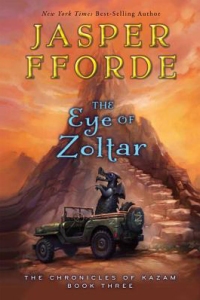 The Eye of Zoltar (The Chronicles of Kazam #3) By: Jasper Fforde

So I’m pretty pissed off at the ending of this book. Basically a huge cliffhanger, have no idea what’s going to be done with the Eye of Zoltar or what’s happened to most of the side characters and no idea when the next book will be published.

The last Nursery Crimes book came out in 2004, and there’s been a third book listed on Goodreads for a long time now. Fforde’s also got another series that ended on a cliffhanger this big and yet the last I read he was writing a book that wasn’t involved in either universe.

Someone else is going to be locked up in my writer’s dungeon.

Anyway, the story was good, hilarious at parts, moving at others. Lots happened, lots. My favorite quotes are:

“If we didn’t execute bankers and rogue traders found guilty of financial mischief, it might give them a clear signal that it’s actually okay, and then where would we be?”

“She did break the law—what do you think they should have done? Given her a bonus for her daring and ingenuity?”

Enjoy the series, now I just have to wait god only knows how long before I get the next book.