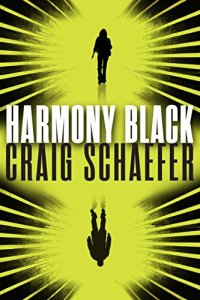 Harmony Black is much more than your average FBI special agent. In addition to being a practicing witch, she’s also an operative for Vigilant Lock, an off-the-books program created to battle occult threats—by any means necessary. Despite her dedication to fighting the monsters threatening society, Harmony has become deeply conflicted about her job. Her last investigation resulted in a pile of dead bodies, and she suspects the wrong people are being punished for it.

While on a much-needed vacation, Harmony gets pulled back into action. This time, though, she’s gone from solo work to being part of a team. Their target: the Bogeyman, a vicious and elusive figure…and the creature that destroyed Harmony’s childhood.

Surrounded by quirky, fascinating characters as dedicated to one another as they are to their new partner, Harmony must learn to trust her team—and a new romantic interest—on a dangerous and deadly mission that conjures up memories she’d much rather forget.

While looking at the top books in Urban Fantasy on Amazon, I came across this book. I liked the cover and thought the blurb sounded interesting. It wasn’t until the end of the book, when I read the Author’s Note, that I realized this was a spin off series. I didn’t feel lost at any point or like I was missing jokes, and I never would have realized there was another series if the author hadn’t mentioned it.

The world and characters created were detailed and fleshed out, but not to the point where I was bogged down in details. It was darker than I normally like and dealt with kidnapped infants, which had me reading into the late hours of the night cause I needed to know if they survived.

I liked Harmony, she was very straight laced and by the book, but not to the point of stupidity. Her new partner, Jessie, was more annoying. She would have been a better character for TV, I think, but in the book was kind of annoying to read the way she talked.

It was well written, with good pacing. There was build up, but it wasn’t constant.

Actually, it really reminded me of a Criminal Minds episode, a lot. A Paranormal Criminal Minds, that would be interesting to watch.

Overall, I liked the book, but because of how dark it was I’m not in a rush to read the next, which is good since it’s not out yet.