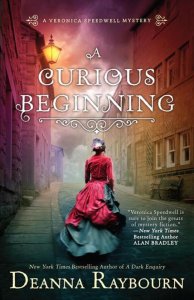 London, 1887. After burying her spinster aunt, orphaned Veronica Speedwell is free to resume her world travels in pursuit of scientific inquiry—and the occasional romantic dalliance. As familiar with hunting butterflies as with fending off admirers, Veronica intends to embark upon the journey of a lifetime. But fate has other plans when Veronica thwarts her own attempted abduction with the help of an enigmatic German baron, who offers her sanctuary in the care of his friend Stoker, a reclusive and bad-tempered natural historian. But before the baron can reveal what he knows of the plot against her, he is found murdered—leaving Veronica and Stoker on the run from an elusive assailant as wary partners in search of the villainous truth.

I’ve read the first couple of books in Raybourn’s Lady Julie Grey Mysteries but ended up stopping for some reason. When I saw this I thought it would be easier to start a new series than pick up on the old one.

Veronica wasn’t a necessarily believable character for her time period but I really liked her in the beginning. She eventually began to wear on me though. She thought so much of herself and her intellect and couldn’t see her own failings. It became annoying.

Stoker was an interesting character and the books ends with you barely knowing anything about him.

The plot dragged for a while. After the introduction of the characters and the murder they ran away and were hiding out for a while. They didn’t learn anything about the murder in that time and just little bits about themselves. It felt a little wasted and grew boring.

I’m not sure if I’m going to read the next. A Curious Beginning was alright but I put it down several times and took longer than it should have to finish just because I got bored. We’ll see.