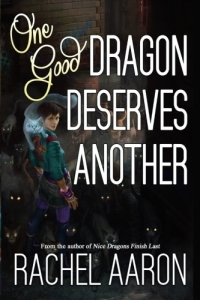 One Good Dragon Deserves Another (Heartstrikers #2) By: Rachel Aaron

After barely escaping the machinations of his terrifying mother, two all knowing seers, and countless bloodthirsty siblings, the last thing Julius wants to see is another dragon. Unfortunately for him, the only thing more dangerous than being a useless Heartstriker is being a useful one, and now that he’s got an in with the Three Sisters, Julius has become a key pawn in Bethesda the Heartstriker’s gamble to put her clan on top.

Refusal to play along with his mother’s plans means death, but there’s more going on than even Bethesda knows, and with Estella back in the game with a vengeance, Heartstriker futures disappearing, and Algonquin’s dragon hunter closing in, the stakes are higher than even a seer can calculate. But when his most powerful family members start dropping like flies, it falls to Julius to defend the clan that never respected him and prove that, sometimes, the world’s worst dragon is the best one to have on your side.

There was a ton going on in this book, lot of immenent death, and seers manipulating the future, and dimensional travel. There was a new dragon introduced that was fun, she wasn’t as evil as the other dragons seem to be. I like the dragons that aren’t as one dimensional, but so far it seems like most of them are, though Justin isn’t bad. He’s just young and stupid so you kind of expect him to act the way he does. I really hate Bethesda, she’s just so stupid. I don’t think I’m supposed to think she is, but that’s all I can think.

Julius was still great and while Marci isn’t growing on me I don’t hate her. She had some small development this book but still not too interested in her.

Didn’t really see the end coming so that was nice. I’m curious to see how things are going to turn out with what happened at the end. I doubt it’s going to be pretty.