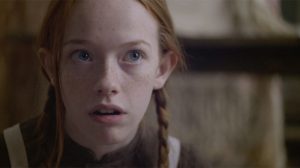 Anne with an E

The adventures of a young orphaned girl living in the late 19th century. Follow Anne as she learns to navigate her new life on Prince Edward Island, in this new take on L.M. Montgomery’s classic novels.

So back in the day I watched the CBC miniseries Anne of Green Gables, then Anne of Avonlea, and freaking loved them. I read the books, liked them not as much but still a lot. So when I saw that there was going to be a new series I was super excited.

This is nothing like the miniseries starring Megan Follows, but I’m fine with that. In fact I’m glad that they did their own thing and stuck more to the source material, it meant that after the first half hour or so I stopped trying to compare the two. It has been a while since I read the books so I could be wrong on that though.

Anne was just as odd as ever. I thought that the actors that played Marilla and Matthew were perfect and it was so easy to see how great an impact Anne made on their lives for the better. It was less obvious, even by the end, the impact they were making on Anne but I’m hoping that will show up in later seasons.

That’s honestly my major concern right now, will it be picked up for more seasons. I hope so, I want to see this story continue through this new lense and with these new actors.