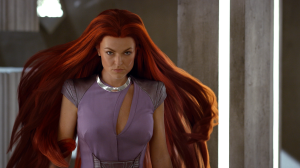 An isolated community of superhumans fight to protect themselves.

If you’ve seen the trailer you already know that this show isn’t going to be any good. I have no idea what ABC and Marvel were thinking, but here it is. If you have to watch superhero stuff, I guess you’ll have to watch this too. First episode was about as good as NBS’s Emerald City, maybe worse. I will probably end up hate watching this because it’s so short, but then again, I might not. Who knows?