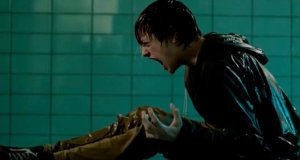 In a world where mutated humans are treated with distrust and fear, an institute for mutants battles to achieve peaceful co-existence with humanity.

For anyone that doesn’t frequently read my blog, I watch a lot of superhero stuff. Movies and TV, if it’s superhero related I will probably watch it. However, I’m starting to get burnt out. I’ve dropped all but Legends of Tomorrow for the CW superhero shows. I didn’t enjoy the last two seasons of the Netflix Marvel shows. I’ve dropped Marvel’s Agents of Shield and I’m probably only going to end up hate watching Inhumans because it’s going to be so short. Legion is the only superhero show right now that I’m actually excited for.

With that in mind, when I heard the premise of The Gifted I was planning on not watching. I was interested, but figured I’d wait until it was finished and binge the entire thing, maybe. Then I saw that Amy Acker was in it and that combined with my mild interest meant I could no longer do that, I had to at least try out the first episode. I’m really glad I did.

Based on what I’ve read of the show it technically doesn’t take place in any of the already established mutant timelines, but there are a number of nods to X-Men story and people. The main thing though is there aren’t so many that someone who isn’t familiar with all the X-Men stuff will feel lost.

The world is not a friendly place for mutants and when two kids find out they have powers things get complicated for them. I really like that their parents find out quickly and the episode starts out with them on the run. We aren’t dealing with them trying to hide while continuing to live a normal life. They are immediately thrust into a hard new world and fighting to survive.

I liked the episode a lot, not as much as Legion’s first episode, but it was definitely enough to get me to continue watching the season as it airs.