In honor of Super Smash Bros Ultimate coming out last week and proceeding to completely dominate all of my time I wrote a fanfic. I’ve always loved Nintendo and wanted a dedicated Peach game forever (Super Princess Peach the PMS game does not count). Since I don’t have one, I thought I’d write a prompt for Nintendo to go off of, you know, in case they want too. 😉

So without further to do, here is my Princess Peach fanfic in all of it’s unedited glory! 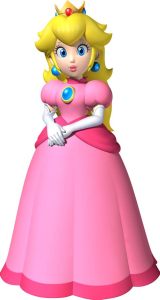 The normally soft spoken and demure Princess Peach screamed the two words causing Mario and Bowser to stop their arguing and look at her in surprise. Daisy and Rosalina exchanged hopeful glances. The Toads continued to cower where they had chosen to hide. The Koopalings looked to their father in concern.

Hands at her sides, looking as calm and cool as usual, not a hair out of place, her beautiful full skirted dress in perfect condition, Peach glided up to stand between them.

Looking up at Bowser, fire in her eyes as she spoke, Peach said, “I have tried to unite our two kingdoms, at least bring them to a point of peace. Time and time again you have undermined that goal by either kidnapping me, conning me, or both. I am finished. I had hoped that we could be friends, that we could rule our respective kingdoms in peace. I have forgiven your actions time and time again, but no more. I will not now or ever marry you. I do not love you and I will only ever marry for love.”

Looking smug Mario shot the furious Bowser a look of superiority. Catching that look Peach’s eyes narrowed as she glided up to Mario.

Looking down at him she said, “You are the hero of Mushroom Kingdom. You have saved me when I’ve asked. Done so much for our Kingdom and I will forever appreciate all you’ve done. However, that does not mean that I owe you my hand in marriage. I know next to nothing about you. Yes you will fight for those weaker than you, using your power for good, but you have been properly awarded and my life is not part of your prize.”

Mario appeared ashamed and his head dropped. Happy to see his enemy also thwarted Bowser grinned puffing out his chest and shooting his children a mischievous glance.

Gliding back from them Peach made sure she had their full attention before she continued.

“For decades my life has been in constant dishevel because of your feud. When I was young, I admit, I was somewhat flattered over your fighting. Two strong, intelligent men, who both wanted me. However, I have had enough. This has gone past little flirtatious games. You have disrupted my life to the point where I have no idea who I am any more.

“I refuse to be a prize that people are fought over!”

Taking a moment to calm down Peach eyed Mario and Bowser to make sure they were actually listening to her. She’d had versions of this conversation before, but she knew it was different this time. She needed to make sure they understood that too.

“I have seen many worlds. I have played many games. I have enjoyed a lot of what my life is, but I need to figure out what my future holds. I need to discover what it is to be me, without either of you interfering.”

Taking a deep breath Peach looked at Daisy with a questioning look. Daisy smiled at her twin and gave her an encouraging nod and confidence flooded Peach.

Turning back to the men in front of her, both looking confused, she ended her assertion with a declaration of intent, “I am taking a break. I need time away from both of you. Time where you aren’t chasing after me, kidnapping me, demanding that I pay you your moons or whatever currency you want, or all the other things that you both do. If you don’t heed my words, if you try to continue your usual games, I will…”

Her words trailed off and a tear trailed down her face. Daisy and Rosalina both took steps toward her, letting her know she wasn’t alone, but they didn’t reach out. They knew Peach was strong and capable, even if she doubted herself.

“If you two continue I will be forced to do what I probably should have done years ago.”

Reaching into her voluminous skirts Peach pulled out a powerful item that radiated a power so strong that no one was able to look directly at it.

Bowser took two instinctive steps backward, looking at Peach warily perhaps for the first time truly understanding what exactly he’d put her through with his selfish actions, that she would go this far in her desire to be away from him. A small niggle of remorse tugged at his heart.

Mario looked at the item lustfully. In all of his years he’d never seen or experienced such a potent power-up. Peach’s words pierced through his desire and reminded him, once again, that there was more to life than the euphoria of a new power. He could always trust Peach to bring him back down to reality.

Unsure if her words had made the impact she needed, but hopeful that they’d at least understood her threat, Peach felt horrible for threatening them. That wasn’t who she was, she was in this situation because she preferred diplomatic resolutions, but those weren’t working. At some point she had to stand up for herself. She’d gotten better at that these last few years, fighting more and more battles, but never the one that mattered most to her.

Feeling overwhelmed at finally standing up for herself Peach felt more tears threatening to fall. Before she lost it and ruined all the hard work she’d just done, Peach turned and ran out of the room.

Bowser and Mario both instinctually tried to follow her, but Rosalina and Daisy blocked their pursuit. The two women had encouraged Peach for years to stand up for herself, reminding her on countless occasions about how smart and resourceful she was, the pride they felt witnessing her confrontation couldn’t be surpassed. They knew it was just the beginning, but they had faith that Peach would come out the other side stronger than ever before and they would do everything they could to help her along the way.

Unable to accept the feelings he was experiencing Bowser pulled out a Super Crown and put it on his head transforming into Bowsette. Gathering the Koopalings she left Peach’s castle and retreated back to her own kingdom to do her own soul searching.

Mario didn’t know what to do. His enemy gone and the woman he thought he loved demanding that he leave her alone, he shoved his hands into his pockets, turned, and left the castle too. He left the Mushroom Kingdom so that Peach could have the space she needed, but he was hopeful that he could one day have a relationship with her. One where they were on equal ground and Peach didn’t feel like he just wanted one thing from her.

In her room, high up in a castle tower, Peach’s chest heaved as she felt like a giant weight had been lifted from her shoulders. They had left when she asked them too. She wasn’t sure if they would be back tomorrow, but today they had respected her wishes. For the first time in a long time she felt like she had some measure of control over her future. It was intoxicating.

A knock sounded on her door and she called out, “Come in!”

Daisy, Rosalina, and Toad walked into her room. She grinned at them in giddy glee.