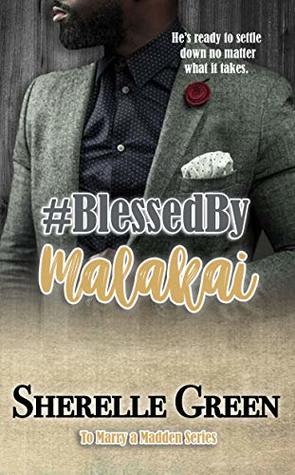 Blessed by Malakai (To Marry a Madden #1) By: Sherelle Green

Every man has his weakness. For prominent painter and sculptor Malakai Madden, that weakness has always been women. Now, he’s finally ready to settle down and shower one woman with his love. There’s just one major problem. Overnight, he’s gained thousands of Twitter followers after his obsessive ex decides to leak some private information. To make matters worse, a well-known media source retweets them! Suddenly, every woman wants a piece of Malakai. And when the #BlessedByMalakai hashtag starts trending, he’s dodging women left and right, and blocking his crotch like he’s secret service securing the president. If he’s ever going to get his life back and find his future wife, he needs to solve this problem and he needs to solve it fast!

Image consultant Avery Nightingale can’t believe she’s landed a meeting with a huge potential client. She knows all about the #BlessedByMalakai hashtag and she’s ready to pitch her ideas. However, when she meets the man behind the Twitter legend, she’s rendered speechless and Mr. Make You Moan is not impressed. He agrees to hire her on one condition. Avery must promise not to feed into the social media craze as others have failed to accomplish before her. She agrees. After all, it’s just one rule, right?

Malakai loves sex with women, a lot. So he’s spent a fair amount of time perfecting his technique and he’s really good at it. Since it’s surprisingly not common to go the extra mile in this area he stands out. When an ex finds out, from his own mouth, he’s ready to settle down she posts a dick pic she’s taken without his permission to Twitter and shit blows up.

I couldn’t help but feel bad for what happened to him but because of a time skip you didn’t really deal with much of his emotions on the violation. The woman who did it ended up having a restraining order brought against her, but Malakai had to deal with women going crazy and his world being turned upside down.

Enter Avery a Tennessee woman recently moved to NYC to start up her PR company. She has followed Malakai’s art career since they were both teenagers, though, not in a creepy way. Honestly, it just skirted the line there for me, but only because of all that he’d already had to deal with.

The attraction is instant, they try and keep things professional, mostly succeed, until he gives her, her first sex stimulated orgasm. That revelation actually surprised me, especially when it’s later revealed that Avery’s ex-fiancé cheated on her with her sister. She’s moved past it and is happy her sister has found love, but how could you say that knowing that your sister is probably not having orgasms? It was just kind of weird and that side of things never addressed or commented on.

They’re both amazing well-adjusted people for having gone through some fairly unique experiences, definitely way more forgiving than I could have been. Malakai and Avery were much more serious than the characters in Single AF, and I kind of missed the crazy lol. I’m curious to see what Green has in store for the other brothers though.