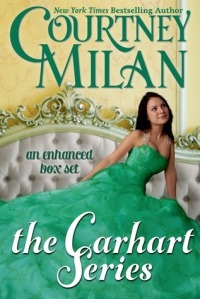 The Carhart Series by Courtney Milan

This Wicked Gift: Lavinia Spencer is too poor to be anything but practical. But when her younger brother lands himself in trouble, she has no choice but to do the unthinkable. She accepts the help of the dishonorable man that she’s always wanted, even knowing that it might mean her ruination…

Proof by Seduction: When Gareth Carhart discovers that his vulnerable young cousin is seeing a fortune teller, he vows to prove her a fraud. But he soon discovers that Jenny Keeble is far more than she appears to be, and before he knows it, he’s caught in her spell…

Trial by Desire: Lady Kate Carhart has no use for the husband who left her years ago. But when he returns, disrupting her carefully-laid plans, she has no choice but to distract him…any way she can.

I hate to say it but this is easily my least favorite Courtney Milan series. Two full length books and a novella, they each had a strong heroine very accepting of their flawed men, and they each had men I couldn’t really stand.

The Wicked Gift had the “hero” pressuring the heroine into sex and while you learn later that he didn’t actually, it still didn’t sit well with me. It ended up being the story I liked the most.

Proof by Seduction once again had a strong heroine, that knew her mind, and was completely capable of taking care of herself. This time the hero was an ass that knew that he was better than everyone and made it very obvious. He didn’t listen to the heroine and ended up annoying the shit out of me.

Trial by Desire was the book I was looking forward to the most. The hero had been in the previous book and he seemed lovable and the fact that he had depression just endeared him to me further. Unfortunately, this book takes place three years after the last which was apparently enough time for the hero to become his own unique ass. I liked that the couple were already married and learning to live with each other, and once again the heroine was great, but I couldn’t get over how much I disliked the hero.