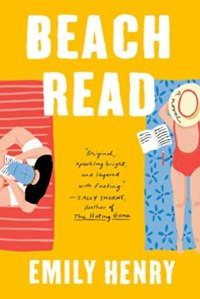 Augustus Everett is an acclaimed author of literary fiction. January Andrews writes bestselling romance. When she pens a happily ever after, he kills off his entire cast.

In fact, the only thing they have in common is that for the next three months, they’re living in neighboring beach houses, broke, and bogged down with writer’s block.

Until, one hazy evening, one thing leads to another and they strike a deal designed to force them out of their creative ruts: Augustus will spend the summer writing something happy, and January will pen the next Great American Novel. She’ll take him on field trips worthy of any rom-com montage, and he’ll take her to interview surviving members of a backwoods death cult (obviously). Everyone will finish a book and no one will fall in love. Really.

Two writers decide to switch genres, one goes for romance the other literary fiction. The story is not really about that. It’s about January working through the death of her father and what she learned about him afterward. There’s a bit of romance thrown in as well. It’s more women’s literature than chick-lit, does that make sense?

January was depressed and had every reason to be, the book is filled with lots of memories of her dad, and her wondering if what she learned about him changed it all. The male lead, Gus, told her several times that she was sunshine and a princess because she always saw the good in people and things, but that is not the January that was in the book. It wasn’t easy to see that in her at all. She wrote romance novels with happy endings, and that was supposed to demonstrate that she was a happily ever after person.

Gus was a brooder. He had a shit life growing up, and didn’t believe he deserved someone as “carefree” as January. He was constantly getting in his own way by not communicating. January had to pry things out of him all the time.

Beach Read was very emotional, lots of tears, especially at the end. When January wasn’t processing all the stuff to do with her dad, she and Gus were interviewing cult survivors and visiting the burned down remains of the cult’s compound. The romance tried to lighten things up, but because of all the negative that was in their pasts, especially Gus’, it didn’t help that much. Beach Read very carefully rode the line between light and depressing.