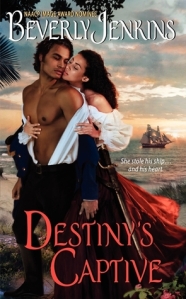 Noah Yates fully believes in the joys of a happy family and a good wife. But that’s not the life for him. No, he would much rather sail the wild seas in search of adventure, not tied down. But then the unthinkable happens . . . he finds himself literally tied down. To a bed. By a woman.

And Pilar isn’t just an ordinary woman. She’s descended from pirates. And after giving him one of the worst nights of his life, she steals his ship! Now Noah is on the hunt, and he’ll stop at nothing to find this extraordinary woman . . . and make her his.

Destiny’s Captive is the last book in the Destiny series and follows the final Yates brother. Pirates, rebels, PTSD, and Cuban history are all included, and it’s, of course, very well done.

Noah was shanghaied on his eighteenth birthday and ended up living through hell. He was starved, given a scar on his face, beaten, and raped. He’s never talked about what happened to him and is an entirely different person than who he was growing up. Dark and brooding and never having fun, then he meets Pilar.

Pilar is part of a group of rebels fighting against the Spanish rule of Cuba. She’s a thief and smuggler. She steals Noah’s boat, and naturally, he tracks her down. She immediately intrigues him, and he proposes almost on the spot.

I’m glad Jenkins included the segregation on the train. It was a reminder of what people had to live with at that time. A lot of the book you feel like you’re in a bubble with the characters, so the dash of realism made Destiny’s Captive better.

I could relate to Pilar’s homesickness. I did think that she got over being a rebel very quickly. It had been her life for a decade, more if you count the fact that her father was one as well. She basically grew up in that world. Then she was told she was being hunted and it would be best if she disappeared, so she did. There was no fight. It was the smart thing to do, but she never even struggled with it, which I found odd for her.

This was an excellent climax to the series. We got to see all of the storylines wrapped up. Seeing Alanza get married was perfect. I do wish we could have seen little novellas of a couple of the minor characters, like Naomi and Pilar’s sister, but it doesn’t seem like those were written. I’m am really looking forward to reading more Beverly Jenkins.