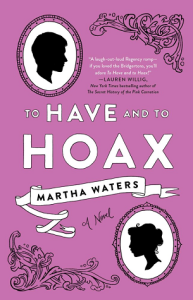 To Have and to Hoax

Five years ago, Lady Violet Grey and Lord James Audley met, fell in love, and got married. Four years ago, they had a fight to end all fights, and have barely spoken since.

Their once-passionate love match has been reduced to one of cold, detached politeness. But when Violet receives a letter that James has been thrown from his horse and rendered unconscious at their country estate, she races to be by his side—only to discover him alive and well at a tavern, and completely unaware of her concern. She’s outraged. He’s confused. And the distance between them has never been more apparent.

Wanting to teach her estranged husband a lesson, Violet decides to feign an illness of her own. James quickly sees through it, but he decides to play along in an ever-escalating game of manipulation, featuring actors masquerading as doctors, threats of Swiss sanitariums, faux mistresses—and a lot of flirtation between a husband and wife who might not hate each other as much as they thought. Will the two be able to overcome four years of hurt or will they continue to deny the spark between them?

With charm, wit, and heart in spades, To Have and to Hoax is a fresh and eminently entertaining romantic comedy—perfect for fans of Jasmine Guillory and Julia Quinn.

Based on the blurb for To Have and to Hoax, I expected a romantic comedy. A wife wants to teach her husband a lesson; he quickly realizes and decides to play along. Instead, it was two spouses acting bitter and childish while constantly thinking about how attractive their spouse was. There wasn’t even a poor attempt at humor. The situations were silly and contrived. I was disappointed.

Violet is supposed to be smart, beautiful, and fiery. She is also incredibly stubborn, though, her husband beats her in that trait. She has spent the last four years, barely talking to her husband because of a misunderstanding he had. There didn’t even seem to be an attempt by her to try and clear things up. Oh well, he thinks this, so I’m not going to try and change his mind. It was ridiculous.

James is stubborn to the point of absolute stupidity. He feels a need to prove to his father that he’s worth something, doesn’t trust anyone, and because of his behavior ends up wasting four years of his marriage. If he had taken any time at all to think about what had happened, but no one in this book has the ability to self-reflect.

One of my least favorite tropes is lack of communication causing issues, and that was the entire conflict of this book. Violet, James, and their various friends were occasionally entertaining, but for the most part, I was annoyed.