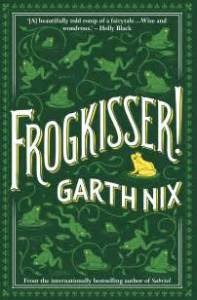 Poor Princess Anya. Forced to live with her evil stepmother’s new husband, her evil stepstepfather. Plagued with an unfortunate ability to break curses with a magic-assisted kiss. And forced to go on the run when her stepstepfather decides to make the kingdom entirely his own.

Aided by a loyal talking dog, a boy thief trapped in the body of a newt, and some extraordinarily mischievous wizards, Anya sets off on a Quest that, if she plays it right, will ultimately free her land—and teach her a thing or two about the use of power, the effectiveness of a well-placed pucker, and the finding of friends in places both high and low.

I’ve been excited about this book since I saw the cover. How could I not be? That is such an awesome cover. Sadly for me the book didn’t quite live up to it.

It took me two weeks to finish which never should have happened considering it’s a middle school read. I just couldn’t get into it. It was slow up until the end and even then it was light on action.

All the things I like about Garth Nix were missing. The world was kind of interesting, but not really. I liked that Anya was a strong princess that rescued herself, but didn’t really like anything else.

It was a disappointment, but I’m still excited for anything that Garth Nix comes out with.