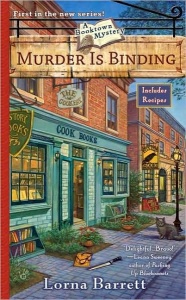 Murder is Binding (A Booktown Mystery #1) By: Lorna Barrett

The streets of Stoneham, New Hampshire are lined with bookstores…and paved with murder.

Stoneham, New Hampshire, was a dying town until community leaders invited booksellers to open shop. Now, its streets are lined with bookstores – and paved with murder…

When she moved to Stoneham, city-slicker Tricia Miles was met with friendly faces. And when she opened her mystery bookstore, she met with friendly competition. But when she finds Doris Gleason dead in her own cookbook store, killed by a carving knife, the atmosphere seems more cutthroat than cordial. Someone wanted to get their hands on the rare cookbook that Doris had recently purchased – and the locals think that someone is Tricia. To clear her name, Tricia will have to take a page out of one of her own mysteries – and hunt down someone who isn’t killing by the book …

Wow Tricia Miles, the main character, comes off as a real bitch in the first few chapters. She’s judgmental, blames her sister or her mother for why she feels certain ways, and is about as boring as a stick in the mud. Things just get worse from there.

I didn’t like the way Barrett wrote, she was overly descriptive about the surroundings, and seemed to be forcing things to go a certain way. A lot of her terms and word choices seemed really dated and I was surprised to see the book was published in 2008. None of her characters were compelling. The setting and premise were interesting, so interesting in fact that I already have the second book (thankfully it was only $.99) but I do not plan on reading it.

So disappointed in this book and will probably never read anything from this author again.

Side note: I really think this book was some sort of wish fulfillment for the author and a way for her to live the life she wants. She gets to solve mysteries, own an amazing bookstore, and have men love her. Too bad the character comes off as a c!@#