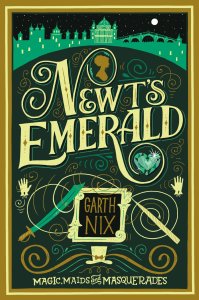 Lady Truthful will inherit her family’s most valued heirloom on her eighteenth birthday. Until the Newington Emerald is stolen.

Lady Truthful, nicknamed “Newt” by her boy cousins, discovers that to her horror, the people closest to her have been framed for the theft. But Newt won’t let their reputations be damaged by rumors from a false accusation. Her plan is simple: go to London to recover the missing jewel. Despite her best intentions, a young lady travelling alone is frankly unacceptable behavior. So Newt and her aunt devise another plan…one that entails men’s clothing and a mustache.

While in disguise, Truthful encounters the handsome but shrewd major Harnett, who to her amazement volunteers to help find the missing emerald under the assumption that she is a man, Henri de Vienne. But once she and her unsuspecting ally are caught up in a dangerous adventure, Truthful realizes something else is afoot: the beating of her heart.

Truthful has far more than romantic complications to worry about. The stolen emerald is no ordinary heirloom-it is the source of the family’s luck and has the power to yield vast magic. It would be completely disastrous if it fell into the wrong hands. The fate of England depends on Truthful securing the emerald.

This was very much a Regency romance with a few fantasy elements thrown in. Honestly, it wasn’t what I was expecting at all from Nix. The only similarity between this and his Abhorsen series was how well written it was.

The fantasy took a back seat to the romance and the period. There were little bits of magic thrown about but they weren’t used in much detail, though, magic did come into play throughout, it just wasn’t as prevalent as I had expected.

Truthful was a great character and similar to a Julia Quinn heroine. She was a lady, but she easily disguised herself as a man to get stuff done. She and the hero were a good match and fun to read.

It was a good book and I enjoyed it, but really the only remarkable thing that it brought to the table was that Garth Nix wrote it. I would very much enjoy more and if he’s trying to mirror the Regency series he had plenty more characters to work with, but I haven’t been able to find anything online about a sequel so we’ll see.

Side Note: This was marked as YA, but the heroine is eighteen and even though it’s a romance the most that happens is a kiss. I would have no problems recommending this to any age group