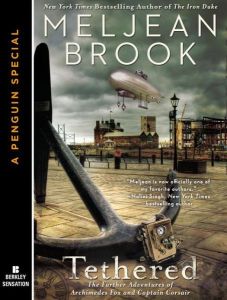 In The Iron Duke, Constable Newberry helped save all of England. But before the events of that novel, Constable Newberry’s faced a danger of another kind: to his heart, by the woman forced to marry him. What will it take for this prudish bounder to convince his wife to stay?

Meljean’s Note: This is a very short story that I wrote for a blog post at All Things Urban Fantasy during their Spooky Legends week. The challenge was to write about a famous urban legend in our characters’ voices, and my urban legend was The Hook.

Surviving on the treacherous Iron Seas requires a heart of steel…but how can Yasmeen hope to survive when her heart has already been stolen by Archimedes Fox…?

Tethered along the south dock of Port Fallow, Captain Yasmeen Corsair’s magnificent new airship, Lady Nergüi, awaits its departure with adventurer and treasure-hunter Archimedes Fox. But this time, Yasmeen, a fearless mercenary who has always prided herself on a heart of steel, has reasons to worry when Miles Bilson, an acquaintance from Archimedes’ earlier smuggling days, sends an urgent message requesting help.

With a past marked by betrayal, Archimedes wonders what his former partner could want—other than revenge. Yasmeen fears that Bilson could threaten everything Archimedes holds dear. Though both Archimedes and Yasmeen love the exhilaration of veering wildly off course, neither is prepared for where their newest risk will take them…or what it might cost them.

These were all either short stories or novellas so I decided to just combine my review. They were all good, but even the ones written before the first book I wouldn’t recommend reading until you’ve read the first book.

They were nice glimpses into the world and characters. With the Blushing Bounder it was a look into a side character which was fun. Tethered showed you after happily ever after so if you loved the characters from Heart of Steel definitely check it out.

They were all fun and I enjoyed them, the prices were all acceptable too.