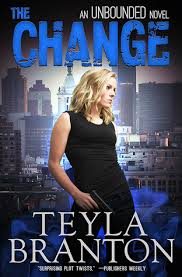 The Change (Unbounded #1) By: Teyla Branton

There are only two ways to kill Unbounded, and fire isn’t one of them—as law school dropout Erin Radkey learns the hard way. By fluke of a recessive gene, she has become Unbounded, a nearly immortal being with paranormal abilities. Erin’s Change separates her from her loved ones and alters everything she believes to be true. A week earlier she was considering a marriage proposal; now she contemplates the best way to stay alive. Caught in a battle between two Unbounded groups, she is also hunted by a secret mortal society sworn to eradicate the Unbounded gene. Worse, a new identification software could mean death for all Unbounded—or enslavement for the entire mortal world. As Erin plunges into this dangerous new life, she must carve out her own place in the madness, protect her mortal family, and decide which group she should join. Her powerful attraction to Ritter Langton, whose family was massacred by opposing Unbounded two hundred and forty years ago, complicates her choices. There are no second chances. Death, life, or love—Unbounded always play for keeps. Non-stop action, terrifying consequences, and powerful romance make this an exciting addition to the world of urban fantasy.

I put this book down several times in the first few chapters. I love urban fantasy but I didn’t like this heroine and that’s one sure way for me not to enjoy a book.

Erin started out like normal, then she almost died a fiery death, then she found out she was pretty much immortal, and started to develop a kind of empathic power. That’s just in the first week. The whole story took less than two weeks and by the end she was able to do things with her power that the more experienced could. I really didn’t find her progression believable.

She also flip flopped a lot. These people are liars, no these people are liars. I love this man, no I love this one. I thought at first the man thing was just her power and not knowing how to control it, but nope. At the beginning of the book she was all about one dude then with almost no notice she was all about another one. Every now and then her feelings for the first one would show up but that didn’t stop her in the end.

Pretty much everyone lied to her, on both sides of the war, and everyone was her father. Not really, but by the end of the book there were three men that thought she was their daughter.

I thought there was too much going on and the character and story progression could have been written better. I could see what Branton was trying to do but she didn’t pull it off for me. Since there are almost 600 reviews and it’s got about a 4.25 rating I’m very obviously in the minority, but that’s ok.

I want to clarify, this was not a bad book, it just wasn’t for me. That happens.