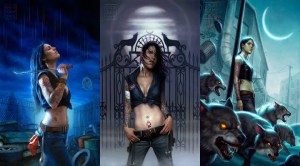 Once I finished Night Broken I had to go back and reread the entire series because I had to. You know?

After rereading the first book I realized it’s the weakest book in the series. There’s a lot of character development and world building and while there is a story it’s not her best by far. There are also some inconsistencies with what is said in it with what takes place in the Alpha and Omega series. She hadn’t written those yet and she probably didn’t have them planned. It’s not a big deal though, at least not to me.

In Blood Bound things pick up a bit but I think it’s in Iron Kissed where the series really takes off. Be warned there is a rape scene, it’s not as graphic as The Girl With the Dragon Tattoo, but it’s there.

Bone Crossed is another vampire book, which personally I think are the weakest in the series, but whatever it’s still good.

Silver Borne finally sees Sam getting some action which makes me happy. He needed someone and you knew from the beginning it wasn’t going to be Mercy no matter what Briggs tried to get you to think.

River Marked was not one of my favorites. It’s Briggs so it wasn’t bad it just didn’t really do much for me. It was more of Mercy taking on a monster that for some reason only she was qualified to do even though she’s weaker than everyone else.

Frost Burned. Hmm. When I first read it I felt let down. It was the first book after Fair Game, an Alpha and Omega book, and I was expecting more. I wasn’t thinking or I would have gone in with better expectations. The Mercy Thompson books are about Mercy and the pack of wolves she is a part of while the Alpha and Omega books have more to do with all werewolves because the leads are a part of the Merrick’s pack. With the most recent reread I enjoyed the book more because I went in knowing what to expect.