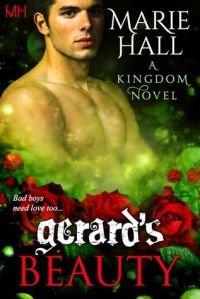 A not so classic retelling of Beauty and the Beast, as seen through the eyes of the villain… Betty Hart has had it with men. Jilted in love, her life now consists of shelving books by day, watching too much Anime by night, and occasionally dressing up like a superhero on the weekends with her fellow ‘Bleeding Heart’ nerds. Men are not welcome and very much unwanted. Especially the sexy Frenchman who saunters into her library reeking of alcohol and looking like he went one too many rounds in the ring. Gerard Caron is in trouble. Again. Caught with his pants down (literally) he’s forced to seek asylum on Earth while his fairy godmother tries to keep Prince Charming from going all ‘Off with his head’. Maybe, messing around with the King’s daughter hadn’t been such a great idea after all, not that Gerard knew the silly redhead was a princess. But his fairy godmother knows the only way to save his life is to finally pair Gerard with his perfect mate, whether he’s willing or not. From the moment Gerard lays eyes on the nerdy librarian he knows he must have her, but Betty is unlike any woman he’s ever known. He thought Betty would come as willingly to his bed as every other woman before her, but she is a woman who demands respect and even… horror of all horrors… love. Is it possible for a self-proclaimed Casanova to change his ways?

Really liking this series so far.

Throughout the book Betty’s nephew played a part. It was Gerard’s reaction to him that caused Betty to start to love him, almost every reaction to him caused Betty to love Gerard more. The ending just seemed to ignore him though. I get that it’s a romance book and the real story is Betty and Gerard but I thought there should be some explanation as to what was going to happen to her nephew. If they go live in the Kingdom who is going to help take care of him?

That’s really the only negative I have to say about the book. I loved that Gerard was neutered and had to learn to actually look at and pay attention to her. He couldn’t just whip his dick out and have her succumb to his sexiness.