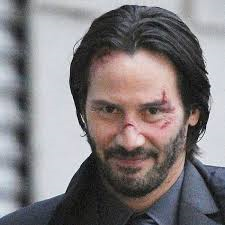 An ex-hitman comes out of retirement to track down the gangsters that took everything from him.

I really wish there were more action movies like this one. It had some flaws but they were minor and they bothered me less than the flaws of other action movies.

Never go see an action movie for its story. I’ve said that before but it bears repeating. The plot was cliche but the conflict was created quickly and once it began we had few breaks in action.

The world that was created was actually really interesting and I’d like to see more of it. There was a hotel that was a sanctuary and no one could be attacked while there. People were paid in solid gold coins, and if you had bodies to dispose of you called in a dinner party. I thought it was fun.

I really liked how the movies was shot. There was no shaky cam, which is the bane of my existence. There weren’t too many quick cuts, and you saw the action that was going on. With all the hype and positive reviews for this movie I really hope more movies imitate how it was shot.

Action wise I could have done without the wrestling moves. Wallowing on the ground choking people is just not my thing. Other than that really liked it.