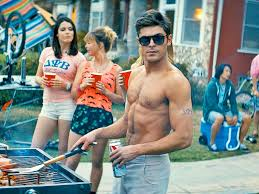 A couple with a newborn baby face unexpected difficulties after they are forced to live next to a fraternity house.

I get it, I really do. They just had a baby, they’re trying to figure out who they are now. It’s difficult. I’m there right now. Thankfully they’re not trying to make a movie from my transition because it went a lot smoother.

Honestly there were moments I really liked but over all I was a bit disappointed. I thought the adults should have woken up to their responsibilities sooner, but then that’s just me. I have a hard time when people in movies shirk their responsibilities for too long. I want them to accept them and learn faster.

I also would have liked it if Zac Efron had grown up faster too. Him winding up working up at an Abercrombie was believable but ended the movie on a downer.