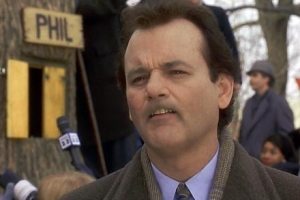 A weatherman finds himself living the same day over and over again.

This is the start of my romance movie marathon for the month. It’s not a conventional romance, but it’s there! I promise. Plus there’s the added bonus of Groundhog Day being February 2nd and it’s the 3rd.

I’ve watched Groundhog Day many, many times. It’s not the normal Bill Murray comedy, but it has it’s comedy elements. From what I’ve read Murray wanted the movie to be more serious than it was, but Ramis wanted more of a comedy. Even with the tug of war going on in the background I think it’s an excellent film.

Phil, Bill Murray, is an arrogant, self-absorbed, weatherman at the start of the film. After thousands of repeated days he discovers that way down deep inside he’s not a bad guy. It took him a while, but after he slept with all available attractive women, ate and smoked whatever he wanted, killed himself a few different ways, he got around to self-improvement. Probably exactly what I would do too, minus the killing myself. Maybe.

Unlike 12 Days of Christmas I really think that Phil probably stuck with the new and improved version of himself. After that much time, stuck in the same place, learning so many new skills, and obtaining so much knowledge, I think he would have to be changed to his core.

I like the fact that he pursued Rita, Andie MacDowell, so persistently and she always shot him down. It wasn’t until he “found” himself that she really did anything with him romantically. I know he sort of melded himself to be the man she wanted but along the way I think (hope) he started doing it for himself.

If you’ve somehow managed to live your life without seeing this movie it’s time to change that.