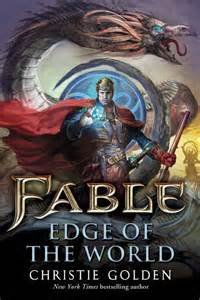 Fable: Edge of the World (Fable #3) By: Christie Golden

It’s been almost a decade since the events of Fable 3, when the Hero vanquished the threat across the sea and claimed his throne. As king he led Albion to an era of unprecedented peace and prosperity. But on the night of his wedding to his new queen, ominous word arrives: The darkness has returned.   Beyond a harrowing mountain pass, the exotic desert country Samarkand has been overrun by shadowy forces. Within the walls of its capital city, a mysterious usurper known only as the Empress has seized control. To protect his realm, the king must lead his most trusted allies into a strange land unknown to outsiders. As they forge ahead along Samarkand’s ancient Great Road, populated by undead terrors and fantastic creatures once believed to be the stuff of legend, the king is drawn ever closer to his greatest challenge yet.   But soon Albion is engulfed in a war of its own. As the darkness spreads, town by town, a treacherous force has infiltrated the queen’s circle. Now the fate of all that is good rests with a faint flicker of hope . . . that somewhere, somehow, heroes still do exist.

When I was done with this book I threw it across the room. Currently I’m debating whether or not to burn it or rip it apart. I don’t do that to books. Even books I hate, I don’t deface or destroy. I’m making an exception for this piece of shit.

I love the Fable games 1, 2, and 3. I also loved the first two Fable books. I was actually surprised how much I enjoyed them because books based on TV shows or movies or games can really be hit or miss. These were great books in a world I loved.

Not this one, though. (To be fair it had nothing to do with the quality of writing and was all about the story.) The story was just one big giant build up to their next game. The game that is just some pimped out Kinect piece of shit. It isn’t a normal Fable game. They haven’t come out with a normal Fable game since the 3rd. I love the Fable world, but I’m not just going to buy everything with the name slapped on it.

This story picks up about ten years after Fable 3 ends. The king has a new wife and on his wedding days finds out that the darkness is rising in another part of the world. Naturally he must raise an army and go defeat it because the darkness is some evil shit.

He leaves his young, inexperienced, wife in control, but it’s ok he taught her everything she could possibly need to know. Nope. He left two people he trusted with her, however since she’s the highest power, and a newb, things do not go well on the home front. Reaver shows up, and with his usual cunning, takes over.

It’s ok because the king is kicking ass and taking names. Not. Pretty much all the people he takes with him die, except the big names. The book ends with Albion in turmoil, the queen a prisoner in her own castle, the two advisors on the run marked as traitors, the king captured, and the few surviving people in retreat.

The end. That’s it. Buy our stupid fucking game to find out what happens next.

I am hugely disappointed in this novel and wish I hadn’t just assumed that it was going to be like the two books before it. It’s not like I had expectations going in because it’s a series. So angry right now. Thinking fire might be the way to go.