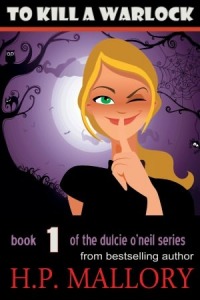 The murder of a dark arts warlock. A shape-shifting, ravenous creature on the loose. A devilishly handsome stranger sent to investigate. Sometimes working law enforcement for the Netherworld is a real bitch. Dulcie O’Neil is a fairy. And not the type to frolic in gardens. She’s a Regulator—a law-enforcement agent who monitors the creatures of the Netherworld to keep them from wreaking havoc in the mortal world. When a warlock is murdered and Dulcie was the last person to see him alive, she must uncover the truth before she’s either deported back to the Netherworld, or she becomes the next victim. Enter Knight Vander, a sinfully attractive investigator sent from the Netherworld to work the case with Dulcie. Between battling her attraction to her self-appointed partner, keeping a sadomasochistic demon in check, and fending off the advances of a sexy and powerful vampire, Dulcie’s got her hands full. As the body count increases, Dulcie finds herself battling dark magic, reconnoitering in S&M clubs and suffering the greatest of all betrayals.

This book has been on my to-read pile for a while, but for whatever reason, I didn’t read it until now. It’s weird, this is definitely my kind of book, but I never really got into it.

Dulcie is a fairy and her love interest is a Loki, neither are supernaturals I normally read, but both something I’m interested in. Dulcie was gorgeous but hated her pointed fairy ears. She was supposed to be the best at her job and was also writing a novel because she really wanted to be an author.

My favorite parts in the book were the parts where she was writing, the rest was fine but not something I really got into. The bad guy was fairly obvious and because of all the clues that were given I felt like Dulcie was stupid for not realizing it. I’m also tired of books where the heroine is beautiful and has multiple men after her, but that has become a pet peeve of mine.

It was an interesting world and I liked some side characters so I wouldn’t be opposed to reading the next in the series, I’m just not in a hurry to do it.