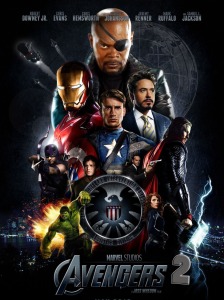 When Tony Stark and Bruce Banner try to jump-start a dormant peacekeeping program called Ultron, things go horribly wrong and it’s up to Earth’s Mightiest Heroes to stop the villainous Ultron from enacting his terrible plans.

Am I getting too old for Marvel movies? Please god noooooooo!!!!! The very idea is horrible and makes me sad, but apart from Guardians of the Galaxy the last 3 Marvel movies I haven’t loved, honestly I don’t even like Iron Man 3.

With Avengers I feel like Whedon was given this list of things that had to be done in this movie to set up the next ones and didn’t get to tell a full story. This movie felt like filler more than a true addition to the series.

I didn’t like the beginning, you were thrown into the middle of a battle, which is fine, but the explanation as to why wasn’t very satisfying. The action was hardly perceivable with all the quick cuts and I wonder if they were trying to cut time by doing that.

The middle and end were much better but still not as satisfying as I was hoping for. Ultron was a some what interesting villain in that you got to see what would happen if you gave a smart teenager with daddy issues lots of power.

The Prophet was cool, though Thor’s explanation as to why he must be created was hardly more than him saying, “Because.”

I thought they did a poor job showing the Avengers as a team and friends. I think the Captain America language ribbing was supposed to help with that, but it wasn’t enough to convey teamwork and one comment too much and reached annoying.

All in all, I was disappointed. It was an alright movie but not close to the best Marvel movie.