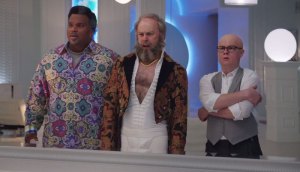 When Lou finds himself in trouble, Nick and Jacob fire up the hot tub time machine in an attempt to get back to the past. But they inadvertently land in the future with Adam Jr. Now they have to alter the future in order to save the past – which is really the present.

I guess I should say more than that?

I laughed a couple times. Maybe once every forty-five minutes.

I hate Rob Corddry’s character, but then I hated his character in the first one. I dislike the endings in both of these movies and I hate that randomly the ending from the first one will pop in my mind and I find myself trying to figure out a legitimate way for an idiot to create google. He had money and a basic idea but absolutely no idea how to execute, I guess that could be all you would need. Ahhhhh!!! I’m doing it again. That has taken up too much brain power because I disappear down a rabbit hole of little things that would get in the way.

Anyway, I liked that the future was impacted by how horrible Lou’s character was. It was a pretty awful future. I hate that these guys rarely learn anything and that at the end of the movie they just continue doing what they were doing, except Craig Robinson’s character. I dislike it when stupid characters don’t learn, I guess it’s too true to life for me.

The trailer made this movie seem more interesting than it was. I didn’t hate the movie but it was not worth wasting your time on.