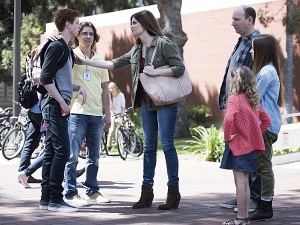 A family comedy told through the separate stories of different family members.

The format of the show is going to take some getting used to, it’s divided up into four stories. Each were fairly funny, with the story from the oldest child’s point of view being the funniest to me.

It was a nice comedy and since I don’t have too many of those on my docket I’ll probably watch it a few more times. There wasn’t anything amazing about it though.