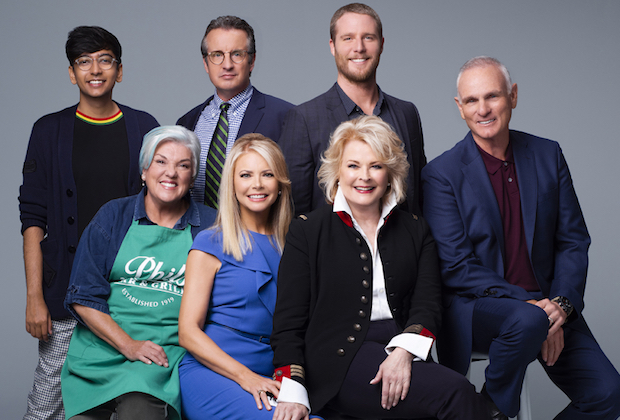 The personal and professional misadventures of a woman working as a TV journalist.

You have no idea how fucking excited I was for this show reboot. I freaking hate most reboots and renewals of old shows, but this is mother fucking Murphy Brown. I watched this when I was a very little girl. I loved Murphy Brown. LOVED HER.

I hooked an antenna up to my TV, set an alarm, and watched fucking commercials so that I could watch this “pilot” live and do you want to know what? It was fucking fantastic.

Murphy was everything that my little girl brain remembered her being. She was passionate, and smart, and liberal, but she was not a fucking hate monger. She let facts back her opinion and sure that sometimes pushes her too far, but it’s a TV show.

Candice Bergen, Murphy, has been missed from my TV, and I hope I get to watch many more seasons to come.

Jake McDorman was cast as her son Avery. I loved him in Limitless so I was very happy to see him on a show I love so much. The chemistry between the two of them was spot on. He was a great son and seeing Murphy be proud of him but still competitive with him was amusing. I really liked that they have him working at a conservative network as the lone liberal. He’s passionate, just like his mother, but he’s also young so a bit more idealistic than she is. It was perfect.

Politics is so charged right now. If you are liberal you hate conservatives. If you’re conservative you hate liberals. It’s ruining the future of our country. However, I thought that this episode did a great job not lobbing insults at the other side. Part of that was Avery’s doing and his willingness to work for the “other side.” Yes, it’s a more liberal show, but I don’t think it’s adding to the hate and fear that’s currently out there. I think, I hope, that it’s trying to be better than that.

*sigh* It’s a difficult world we live in right now and I don’t envy the writers of the show, but I can’t wait to see what they have to show us and dear god please let this show not get canceled.

Ten years before Kirk, Spock and the Enterprise, the USS Discovery discovers new worlds and lifeforms as one Starfleet officer learns to understand all things alien.

I really like Star Trek, specifically Star Trek: The Next Generation. Currently, I’m in the middle of a re-watch with a bunch of friends so it’s also fresh in my mind. Big reveal, I’ve never watched Star Trek: The Original Series. I’ve seen episodes and what I’ve seen has not been my cup of Earl Grey tea. Also, as I’ve mentioned before, I am not a fan of prequels. The fact that this show happens before TOS is not a bonus to me.

I went in with very low expectations. The trailers did nothing for me, the articles I read about the story did nothing either. All they showed me was that this was not going to be the diplomatic, thinking Star Trek with hope that I love so much.

First, the positives. I liked the interior design of the ship. It was interesting and looked different from the other ships, but still modern. I liked the little rivalry between the first officer and the science officer. I liked the different species, though I didn’t know what any of them were. I also really liked that the captain and first officer were women, even though I’m pretty sure TOS had an entire episode about how that wasn’t possible.

As far as positives go, that’s it. There was so much changed and I felt like there was very little respect for the source material. I get wanting to do your own spin to things, but when you’re dealing with something that’s got so much lore and cannon material already you can’t just reboot and expect people to fall in line.

They completely changed the design of Klingons, fine, they looked too much like Lord of the Rings orcs for my taste but whatever. However, why did they have to go and change the bat’leth? Why did they have to completely focus on one side of the Klingons and forget all the development that was done on their species? Yes they’re a warrior race, but they also have traditions and honor and diplomacy. It also felt like Klingon sounded different and I wondered if they had someone who spoke it on staff, but I could be wrong on that front.

The first episode ended on a cliff hanger because CBS wants you to subscribe to their All Access streaming service, however they’re not uploading all episodes at once they’re releasing them weekly. My original plan was to wait until either the midway point or the end of the season to subscribe and binge, but the more I think about the episode the more I disliked it so I’m not sure what I’ll do.

I want more Star Trek, but I want the Star Trek I love. I’m tired of the grim dark, hopeless, action packed Star Trek. That’s fine for a Sci-Fi action series, just not Trek, not my Trek at least.

The adventures of Superman’s cousin in her own superhero career.

I’m slipping yet again on my TV pilot reviews. This show has been on for a while now and I just realized I hadn’t written a review. That was partly because I wanted to wait a few episodes before I made my judgement.

I’ll be honest, I didn’t have high hopes for this show. I really like Supergirl, but I think I like her potential more than what’s ever been done with her. Out of all comic book heroes I’ve read more of her comics than anyone else, and while I love her, she rarely has any good story lines.

The show is, to me, just like that. It has potential but Supergirl just kind of screws stuff up or stumbles on the answer or has someone else bail her out. Whether it’s her sister or her aunt or someone else, she’s more of a beat the enemy into submission hero than Superman is. I realize she’s just starting out and she’s going to make mistakes, but I guess I demand more.

I’m also not overly fond of the feel of the show, it’s so bright and girly. Which is weird because I honestly dislike how gritty and dull other superhero shows/movies can be. I’m not sure why it rubs me the wrong way, but it does.

The show has gotten better as its gone on. I like the supporting cast and think the Calista Flockhart is my favorite character. I’ll probably continue to watch it if it gets picked up, but it is definitely not my favorite superhero TV show. That award goes to Agent Carter.

Two detectives with different views on the world team up and using cynicism, guile and deception, they clean up the streets of Battle Creek.

Netflix recommended this to me after I finished Mysteries of Laura. It was short only thirteen episodes and I immediately wanted more. It was a nice procedural that wasn’t too light but didn’t make me want to curl up in a ball scared to leave the house. The characters were interesting and fun, there was also a nice bit of humor.

Battle Creek was canceled, so unless some website saves it there won’t be any new episodes. The overall story arc is pretty much resolved so you’re not going to be left with a huge cliffhanger. I would recommend watching it if you’re looking for a good, short fix.

A man gains the ability to use the full extent of his brain’s capabilities. A television adaptation of the 2011 film, ‘Limitless’.

I haven’t seen the movie this is a spinoff of, so the appearance of Bradley Coopers character didn’t mean more than, “Oh that’s nice it’s Bradley Cooper.” From what I’ve read he might make a few more appearances, we’ll see.

Anyway, this is the first pilot I’ve seen this season that I actually liked. I’m hoping that they do more than just make this some kind of procedural show, though they probably won’t, but I think there’s some potential.

I like the casting. I enjoyed McDorman in last season’s failed Manhattan Love Story, so it’s nice to see him getting work. He’s funny but not the point where this is a comedy, just enough to lighten it up in places. I saw the first two seasons of Dexter back in the day so I recognize Carpenter but she isn’t locked in my brain as someone who drops the f-bomb all the time. I even like Harper from his CSI New York days.

It will interesting to see what happens to this show. If it becomes just another crime solving drama or if it becomes something more.