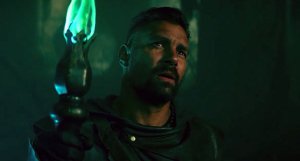 Series of adventures, war, and evil that occur throughout the history of the Four Lands.

I don’t watch MTV so I managed to see no marketing for this. It wasn’t until I was reading a thread about upcoming TV shows that I even found out about it. On a whim I set my DVR to record and apart from the fact that it recorded a horrible SD quality version I was really impressed.

Most of the reviews I’ve read have been pretty negative, so naturally that meant I liked the show. I hate when that happens, it’s Tomorrowland all over again. Oh well, the fan reception (what I’ve read at least) has been pretty positive.

I haven’t read the source material, in fact I’m not sure if I’ve read anything by Terry Brooks, but I don’t think that made the show and less enjoyable. Which is not always the case, so that was nice.

I loved the fact that there are two kick ass female leads and of course Manu Bennett was awesome. There’s a lot going on in the pilot and at times it was difficult to watch because my cable was messing up, but I’m really excited to see what happens next.

That ending, man, I’m already looking to see if I can watch the next episodes on MTVs app.