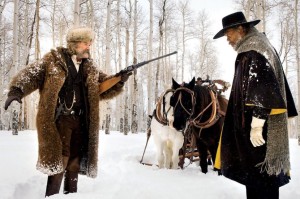 In the dead of a Wyoming winter, a bounty hunter and his prisoner find shelter in a cabin currently inhabited by a collection of nefarious characters.

I was lucky enough to see this movie in 70mm during my holiday travels. We weren’t actually in a city that was playing it, but we were close enough to drive.

The visuals were great and it was kind of sad that this medium isn’t used much anymore. The score was excellent and I thought it was cool that Ennio Morricone, the dude that did The Good, the Bad, and the Ugly, composed it.

Apart from those two things, though, I didn’t think this was as good as Inglorious Basterds or Django Unchained.

The movie had almost no action until the very end and a lot of dialogue. I know you’re saying, “But it’s a Quentin Tarantino film, what did you expect?” I expected better pacing, I guess. I don’t need lots of action in his movies, but I needed something other than gorgeous shots to break up all the dialogue. There were also little things that were kind of stupid about the plot, plot holes I guess. Maybe they’ll make more sense after a second viewing.

I thought the ending was a little bit lacking. I kind of hoped that they’d do a Butch Cassidy and the Sundance Kid thing, but oh well. It was fine, just kind of there.

I loved the roadshow experience and would do that in a heartbeat and I enjoyed the film more right after I got out of it, but the more I thought about it the less I liked it. Oh well, if you’re a fan of Tarantino see it, if not I would recommend some of his other works.