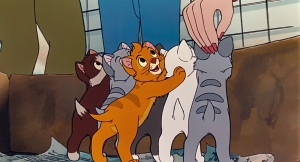 A lost and alone kitten joins a gang of dogs engaged in petty larceny in New York.

I remember seeing this movie in theaters, which is actually kind of crazy since I was only two. Because of that early viewing I had some nostalgia attached to it. I remembered loving the songs and thinking it was a cute, happy movie. When my daughter picked it out to watch, I figured, why not.

Wow, what a shock. The fun happy film that I remembered was not what we watched. I still like the songs, but they are such a smaller part of the movie than I had remembered. When the animation was good it was like 101 Dalmatians and Aristacats in that it was gritty, but I don’t have a problem with that. New York City in the 80s was gritty. However, often times the quality would dip and it would look like something from a TV cartoon, definitely not on par with other Disney animation.

I was saddened and disappointed and almost wish I hadn’t watched it. My daughter liked it, but I’ll probably do my best not to add it to a regular rotation.