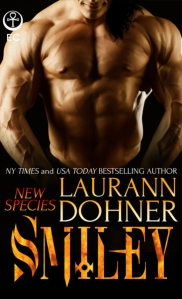 Vanni is furious when her fiancé tricks her into attending a conference where his father’s church is protesting the New Species Organization. She hates everything those vile bigots stand for. Vanni goes to the bar to cool off and ends up seated next to a handsome New Species. Things heat up fast when they are both drugged.

Smiley doesn’t want to believe the sweet human would dose them with the breeding drug. He’s willing to trust her and determined to save her life. He’ll hold her. Protect her. Offer up his body to distract them both from the pain. She is his female, even if she doesn’t realize it yet.

I really loved Smiley as a character but I did not like this book. First off it started off with the couple getting drugged and if they didn’t have sex they’d be in a lot of pain. There was pretty much no foreplay before the reader was thrown into a lot of explicit sex scenes. Did not like. I ended up skipping a lot of this book.

I liked Smiley but hated Vanni. She was super weak and shy and submissive and just not my type of female lead.

The story was also a lot shorter than a normal new species and I felt like not much happened. They got her to Homeland quickly and she never left. The bad guys were captured behind the scenes and that was pretty much it.

I thought some of the ideas in the book were really good, but they didn’t reach their full potential. They kind of unraveled and became nonsense. I’m also getting tired of all the human males being depicted as horrible. Out of all of the human men in this series I think there might be one nice one. One. Maybe.

I really like the idea behind the New Species series and in the beginning I liked what she was doing with it, but lately there just hasn’t been enough development. The series has kind of stagnated.