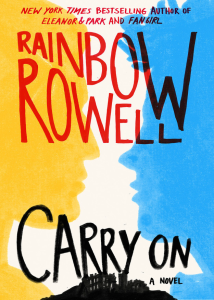 Carry On By: Rainbow Rowell

Simon Snow is the worst chosen one who’s ever been chosen. That’s what his roommate, Baz, says. And Baz might be evil and a vampire and a complete git, but he’s probably right. Half the time, Simon can’t even make his wand work, and the other half, he sets something on fire. His mentor’s avoiding him, his girlfriend broke up with him, and there’s a magic-eating monster running around wearing Simon’s face. Baz would be having a field day with all this, if he were here—it’s their last year at the Watford School of Magicks, and Simon’s infuriating nemesis didn’t even bother to show up. Carry On is a ghost story, a love story, a mystery and a melodrama. It has just as much kissing and talking as you’d expect from a Rainbow Rowell story—but far, far more monsters.

Rainbow Rowell has joined Ilona Andrews and Patricia Briggs in the very short list of authors that I will buy whatever they do. I love her, she reaches a part of my soul that no other author I read does.

I loved Fangirl and I thought the parts about Simon Snow and Baz were fun so I thought it was pretty cool that Rowell was taking it a step further and writing a full book about the characters. I did not expect this, though.

It was like reading the eighth book in a series, there are mentions of exploits from past adventures, but the book isn’t really about those adventures or even the current one, it’s all about the relationships. It’s—awesome.

Even in a fantasy novel Rowell’s characters are so real and common, but not too common, they’re normal, but a weird normal. I love them.

Simon is stupid, but kind of on purpose. He doesn’t want to look any deeper into anything because the magical world he’s apart of is the best thing in his life. Baz may not be the chosen one, but he’s been given just as many obstacles to overcome.

The romance in the book is perfect and filled me with all kinds of warm fuzzies. I just really loved this story.

Fair warning, this is not a normal fantasy book. There’s magic and monsters and spells and all that jazz, but that’s not what makes it so great. It’s the characters and their reactions. You still care about the whole end of magic mystery going on, but because it affects the people you’ve come to love.