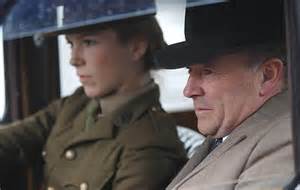 As WW2 rages around the world, DCS Foyle fights his own war on the home-front as he investigates crimes on the south coast of England. Later series sees the retired detective working as an MI5 agent operating in the aftermath of the war.

Wow was not expecting this, it was crazy good. Foyle’s War was recommended to me by Netflix after my parents visited and used my Netflix account. One day I thought, why not, next thing I knew I was spending a month and a half watching this show. It was hard to get anything else done because all I wanted to do was watch.

I loved the fact that Foyle, Michael Kitchen, didn’t let people use the war as their excuse for being bad. So many people would tell him there’s a war going on, what I did was for the greater good, and he would just look at them and give that dad look that says, ‘I’m so disappointed with you and that the ends doesn’t justify the means.’ Loved it.

Foyle had a moral compass that could not be corrupted.

The side characters were just as interesting. Sam, Honeysuckle Weeks, made it through the entire season and I liked to see the development. Milner, Anthony Howell, didn’t make it in the final few seasons and the last season he was in was kind of rough, but he was still a good character.

Honestly, that’s my only complaint with the show. The first five seasons are amazing, but the last few aren’t as good. Foyle is no longer a police detective or not really and Milner eventually gets a promotion but he changes when that happens. He seemed to really learn from Foyle, but then all of a sudden he’s just as bad as everyone else.

It didn’t make the show horrible or even bad, but it wasn’t as awesome as those first few seasons.