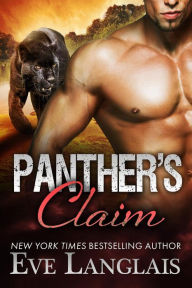 Cynthia: So I met a man. Mom: Is he single? Hitting on the wrong woman finds Daryl regaining consciousness in a motel taped to a chair. Things were looking up–and not just below the belt. A sexy, cocoa-complexioned veterinarian–with killer curves–wants answers, and he’s only too happy to give them to her, for a price, say a kiss, or something more, from those luscious lips. The problem is Cynthia isn’t the type to fall for flirty words and panty-dropping smiles. She tempts Daryl into helping her. Teases him into acting. Claims his heart without even trying. But that was okay because…She’s mine…and someone was trying to hurt her. Hell no. This kitty isn’t afraid to unleash his claws and rescue the woman he wants. An intriguing, hot woman, a mystery, and danger? Sounds like fun, and Daryl is ready to play. He’ll do anything to claim Cynthia as his mate.

Kind of let down by this book. I liked the romance, but I wish the rest of the story had been developed more. Cyn comes to Bitten Point to find her friend Aria but sorta doesn’t care by the end since she’s found her man. It mentions off hand that she got a call from her that sounded odd but Aria said she was fine. That was it. This was after they found a body and already had one mysterious call from her friend.

I liked the romance, the characters, but wish that there was more story development.