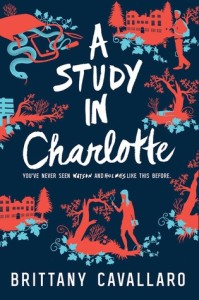 A Study in Charlotte (Charlotte Holmes #1) By: Brittany Cavallaro

The last thing Jamie Watson wants is a rugby scholarship to Sherringford, a Connecticut prep school just an hour away from his estranged father. But that’s not the only complication: Sherringford is also home to Charlotte Holmes, the famous detective’s great-great-great-granddaughter, who has inherited not only Sherlock’s genius but also his volatile temperament. From everything Jamie has heard about Charlotte, it seems safer to admire her from afar.

From the moment they meet, there’s a tense energy between them, and they seem more destined to be rivals than anything else. But when a Sherringford student dies under suspicious circumstances, ripped straight from the most terrifying of the Sherlock Holmes stories, Jamie can no longer afford to keep his distance. Jamie and Charlotte are being framed for murder, and only Charlotte can clear their names. But danger is mounting and nowhere is safe—and the only people they can trust are each other.

A Study in Charlotte is the first in a trilogy.

The Lois Lane YA series lulled me into a false sense of security and I thought that I’d try another couple of YA books, wrong decision. A Study in Charlotte was what I dislike most about YA books, teen angst. Added to that was pretty much every negative character trait that Sherlock Holmes has all shoved into a teenage girl that had already been given every negative trait of a teenage girl. It was not appealing.

Watson could have made things at least a little better, but he didn’t. He spent the entire book creepily crushing on Holmes, which is a feat since there isn’t much of an age difference but the way it was all written just felt disturbing.

I thought the concept of this book was interesting, but it was a miracle I finished it. I don’t loathe it, but it is not something I would recommend.